Nothing demonstrates the dramatic growth of the Onan company more than the startling changes in its physical plants during the past 60 years. 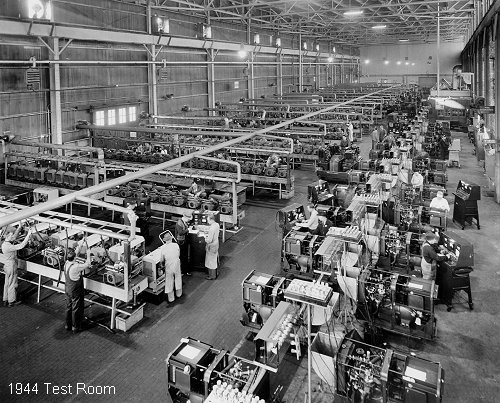 From D. W. Onan’s basement to a converted garage to a converted barn to a converted house to a sprawling hodge-podge of less-than-efficient industrial buildings used during World War II, Onan’s operations are finally located in a series of strategically located, modern manufacturing facilities. After nearly a half-century of occupying plants that originally were built for other purposes and adapted as best could be for Onan’s use, most of the company’s facilities today were specifically designed for its operations.

Onan’s largest facility is in Fridley, a northern suburb of Minneapolis. In the mid-1960s, after more than 20 years in its University Avenue plant in Minneapolis, Onan management decided a new, modern facility was needed to keep up with anticipated growth. A 147-acre site in Fridley was purchased in 1967. Constructed on the site at Central Avenue and 73rd Avenue Northeast, where a manufacturing plant of 473,600 square feet, a three-story office building of 85,000 square feet, and an engineering building of 66,000 square feet. The new headquarters plant was fully occupied in 1969.

By then the Onan company was one of the world’s largest manufacturers of electric generator sets, having produced more than a million units since its founding, and it was operating out of the most efficient generator set facility in the world.

Only slightly smaller than the Fridley facility is Onans ‘ s manufacturing plant at Huntsville, constructed in 1974. Located on 90 acres of land adjacent to the Huntsville-Madison County Airport, the $20 million installation was primarily designed originally to manufacture generator sets for recreational vehicles. Since then Onan has turned the facility into an engine plant by investing another $100 million in equipment and increased warehouse space for the production of Onan’s L Series family of diesel engines.

Onan’s third manufacturing facility is in San Diego, operated by a subsidiary, Elgar Corporation, acquired in 1979. Elgar, which occupies five buildings in the Kearney Mesa area in San Diego, produces AC power conditioning equipment and uninterruptible power systems. Most of Elgar’s products are designed to correct power variations, voltage drops, line noises and other problems that can plague sensitive electronic equipment. Elgar manufactures high isolation transformers to eliminate common power problems, precision AC line conditioners for laboratory and instrumentation applications, and power regulators for computer and high technology loads. Its uninterruptible power systems protect against the effects of brownouts and blackouts on sensitive electronic gear such as computers and process controllers, and, when installed in conjunction with emergency standby power generator sets, provide power during the interim period between when a power outage occurs and when the standby generator set (s) starts and reaches operating RPM and frequency.

Other buildings owned or leased by Onan in Minneapolis and Huntsville provide various support functions for the company’s manufacturing and marketing operations. Among these are the James C. Hoiby Technical Center, located on the Onan site in Fridley, and the Central Parts Distribution Center in Brooklyn Park, a Minneapolis suburb not far from Fridley.

The James C. Hoiby Technical Center, dedicated in June, 1979, and constructed and equipped at a cost of $6 million, is Onan’s research and development facility. The 30,000 square-foot, two-story building houses materials research laboratories, electrical and electronic labs, and computerized engine development test cells. More than two dozen engineers and technicians staff the Hoiby Technical Center. James C. Hoiby retired in 1977 after a 43-year career with Onan, during which he was honored for the many engineering contributions he made to the company and its products.

At the Central Parts Distribution Center, Onan, in 1981, consolidated all the functions relating to parts and service in one building. More than 25,000 different items are controlled and handled at the 115,000 square-foot Center with the help of a modern computer system. The Center receives more than 150 orders for parts daily from 215 Onan distributor and dealer accounts in the U.S. and overseas. Also housed in this leased facility is Onan’s Service Training School, which provides training in formal courses on all aspects of servicing and maintaining all of Onan’s products for distributors, dealers, customers and Onan employees. Onan also has two warehouses in Minneapolis, one that is 90,000 square feet and the other 42,000 square feet. It also has a 58,000 square-foot warehouse in Huntsville.

Although all of Onan ‘ s products are now manufactured in the U. S., a few years back Onan had manufacturing facilities in Brazil and Canada. However, manufacturing operations in these countries proved financially disappointing, and both plants have been sold.

The Brazil operation involved Onan’s first experience in acquiring another company. In 1972 Onan purchased a Sao Paulo firm called Montgomery-Cisa, Maquinas e Motores S/A, Brazil’s leading producer of small gasoline engines. It was doing about $5 million in sales annually at the time Onan acquired it. The product line was expanded to include gasoline engines, diesel engines, alternate fuel engines, and a variety of small generator sets and pumps. A small profit was made by Onan-Montgomery in the first two years after the acquisition, but losses were experienced from then on, and the company was sold in 1980.

Tom Valenty, president and chief executive officer during the years Onan owned the Brazilian company, said, “Shortly after the acquisition, we were soon to became intimately aware of the problems of doing business in a country with an inflation rate that reached 50 percent annually, coupled with the impacts of government controls on prices, wages, benefits, imports, duties, deposits, etc.”

Onan started its manufacturing in Canada in 1964 at Guelph, Ontario. It already had a healthy volume of sales in Canada, and the Guelph operation was started with the objective of serving Canadian distributors better and to satisfy the “Buy Canadian” trend that was growing in that country. Sales did increase during the first three years of Onan-Canada’s operations and a new manufacturing facility was constructed in 1967. Even though the product line was expanded, sales did not meet the company’s projections following completion of the new plant and in April, 1970, the plant was closed and later sold. Onan currently supplies its Canadian market with products manufactured in the U.S.

Onan’s employment during the late 1970s and early 1980s at its three locations has ranged between 2,500 and 3,000, with the bulk of the workers about 1,800 in the Minneapolis locations. Employment at Huntsville is about 500, but that number could increase to over 1,000 as Onan’s L diesel engine business reaches maturity. There are about 350 employees at the Elgar facilities in San Diego.

Elgar was acquired to complement Onan’s generator set line with power conditioning and uninterruptible power products, While the performance of the Elgar subsidiary has been only moderately successful since the 1979 acquisition, a reorganization and plant updating were in process during 1981 – 1983 and a strong contribution to Onan profits is anticipated from Elgar in the future. Elgar is hampered by having facilities spread out in five separate buildings, and a consolidation of facilities would be desirable.

Unexpected economic developments shortly after construction started at Huntsville very nearly killed that project before it was completed. Original plans called for production of aluminum gasoline-powered engines and the generator sets powered by those engines at Huntsville. The generator sets were in high demand by the motor home market, an industry that had been growing spectacularly during the late 1960s and early 1970s. There also was a heavy demand for engines for garden tractors. Both the motor home and garden tractor business mushroomed after the new plant at Fridley was constructed, and it soon became obvious Onan couldn’t meet all the new demand with production facilities in the Twin Cities.

About six months into the construction of the Huntsville plant, however, the Arabs imposed their oil embargo in October 1973, resulting in soaring gasoline prices, and the motor home market practically collapsed overnight. The severe 1974 recession soon followed, and garden tractor demand also fell off sharply.

Tom Valenty said he seriously considered stopping the Huntsville project, but cancellation charges would have cost Onan about $11 million, so the construction continued. As the economy recovered beginning in 1976, sales of motor home generator sets and garden tractor engines improved dramatically, providing a good demand for Onan products manufactured at Huntsville.

Then the development by Onan of its diesel engine program occurred a few years after the Huntsville plant was completed, and L series engine operations now dominate production in the ultra-modern Alabama plant.

The new plant easily could have been constructed in the Twin Cities instead of Huntsville, had it not been for a very unfavorable business climate in Minnesota. The Fridley complex had been designed to allow for future expansion, and it originally was planned to enlarge that facility when sales volume would require additional manufacturing space. There was ample land available at Fridley and many other factors in favor of expansion there, but Minnesota, under its then new governor, Wendell Anderson, had just decided to shift the state’s tax burden from home owners to business. Corporate income taxes, personal income taxes and the sales tax were boosted so real estate taxes could be cut and state spending could be increased.

At about the time Onan was deciding where to construct a new plant, its tax liability in Minnesota rose by almost 50 percent. And while Minnesota was increasing Onan’s tax liability, officials at Huntsville came up with several ideas to make a move there exceptionally attractive from an economic standpoint. The decision to build in Alabama instead of Minnesota saved Onan about $3 million immediately, and an amount substantially exceeding that with the planned expansion into diesel engines.

Tom Valenty didn’t allow the situation to escape the notice of Minnesota’s new governor, in a letter to Gov. Anderson, Valenty stated, “The proposal to meet the rising cost of operating the state government by massive increases in taxes is likely to kill the goose that lays the golden egg. The state derives its income form business and individuals. The individuals derive their income from the businesses, whether it be manufacturing, farming, banking, or services. The critical item in this chain is business. Without business there are not jobs no income no tax money.