A patriot: He was born on July 4, 1886, in Moorhead Minnesota of a railway?worker father and practical nurse/teacher mother.

An engaged citizen: He was president of the Minneapolis Civic and Commerce?Association (later called Chamber of Commerce).

A community booster: He was one of the five founders of the Minneapolis?Aquatennial in 1940, an annual civic festival that continues today.

An optimist: He was a life member of the Minneapolis chapter of the Optimist Club and served as National President in 1932. Click Here to listen to his message on YouTube.

He cared about kids organizing the Sister Kenny Institute to treat kids with polio and formed a foundation to channel his money to it.

He walked the talk doing the sweaty and dirty work building the Optimist camp for underprivileged boys.

He was generous: The foundation he started began with kids and moved to medical research. It soon branched to other interests involving people-oriented programs.

He believed the United States of America was exceptional: He believed that our freedom was an inalienable right, founded on Christian principles, and empowered the people to?govern themselves.

He believed anyone could be as great as they wanted to be: He believed that he could, with a 7th-grade education, jump into the high tech business of 1910, which was electricity and automobiles, and make a go of it.

He believed in Capitalism and Free Enterprise: The progress of America in culture and science to become the greatest nation in the world would come through individual efforts. Nothing happens until something is sold, and before that, it has to be made. He shared with his associates and employees the profits by pioneering a?profit sharing plan entirely funded by the company.

The Company He Built

In 1944, as he saw World War II would come to an end, Dave Onan knew his work?was cut out for him.

Government orders had swollen the business from one plant?on Royalston Avenue to five scattered around Minneapolis. Serious problems from the collapse in size would result. He had promised every returning veteran a job. He would have to use the energy and technology learned from the war effort to build a different company, much smaller in peacetime. 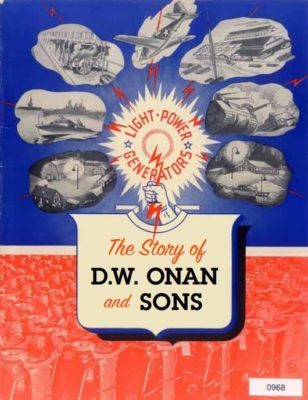 The 56 pages 1944 Story of D. W. Onan & Sons included in this section are intended to showcase his company’s capabilities so that old customers and suppliers as well as new ones would be impressed. It was also deliberate praise of the employees. Internal morale was important. Several thousand copies were printed and mailed or handed out. He received many congratulatory letters back. Few people, even his friends, had any idea the One-Man-Shop had grown into such an enterprise.